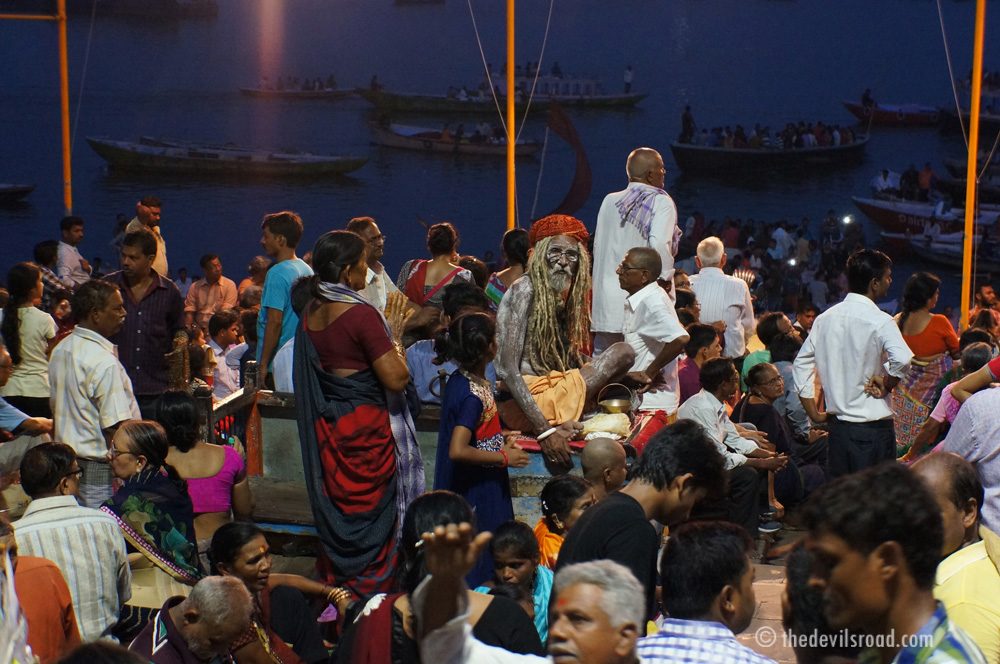 “Yet, that was where it happened, in the palace of the widows on the shores of the Ganges in the oldest living city in the world, the city which was already old when the Buddha was young, Kasi Benares Varanasi, City of Divine Light, home of the Prophetic Book, the horoscope of horoscopes, in which every life, past present future, is already recorded. The goddess Ganga streamed down to earth through Shiva’s hair… Benares, the shrine to Shiva-the-god, was where I was brought by hero-Shiva to face my fate.”
Midnight’s Children, by Salman Rushdie (1981)

Benares, 7pm. Every evening, locals and visitors gather on the city’s main ghat on the banks of the river Ganges to witness the Ganga Aati prayer ceremony. The air is heavy with thick smoke from clay cups burning ghee and the smell of burning human flesh that drifts down from Manikarnika Ghat, a hundred meters down river. A naga sadhu, a Hindu ascetic, his body and dreadlocks covered in ash taken from the dead, sits on a platform, blessing passers-by, asking for money, smoking a chillum filled with bhang, low quality marijuana that keeps you high through the night.

We sit on the stairs and enjoy an esoteric experience. A man wearing a earring in the shape of a cross, his emaciated head crowned by a purple turban, introduces himself, “I burn dead bodies for twenty-five years”.

Without anyone asking, he tells his story, the way he’s told it a million times. His far away stare, his monotonous tone and his golden earring hypnotize us. “This is where Shiva’s mother was burned and since then the fires have been burning. The bodies are cleaned with seven oils. This place was not built for human beings. 250 to 300 hundred bodies are burnt here every day. Lepers, monks and children are not burnt. The chest and the pelvis don’t burn.”

He wants money to pay for sacred wood that poor people can’t afford. The wood has special characteristics – it kills the smell of burning flesh, it continues to burn, even when it rains. It costs between 250 and 900 rupees a kilo. Next, he wants money for old peoples’ hospices. Spiritual blackmail is next – if we give him money we will have good karma, I ask him if it possible to buy karma. He says no, but karma is better if you give money. Then of course, he has a wife and four children, two boys and two girls, and we should help. Mostly though he urges us to contribute to his opium fund, as his need for the precious stuff gradually reveals itself in his eyes.

On the way through the old city we pass a cheap guesthouse with Om signs painted on its purple walls. In the city’s narrow alleys, dogs, cows, men, women and children go to sleep. The sacred fire has been burning for 4000 years, the drug dealers are still out to offer us Chinese opium, LSD and beer, all in one breath. “Which country?” the most brazen one says demands. “Gundaland”, my companian replies. “I’m from Mafialand, we can do business together,” the drug dealer replies fiercely.

The Ganges, the country’s holy river in the eyes of its Hindu majority, is so outrageously polluted, it looks like black treacle in the night. But by morning pilgrims will happily bathe in it, drink its putrid waters and swim-race behind the wooden colored boats.

A kid sits on a horse on the other, barren side of the river.